Ten copywriting ‘rules’ you should break before you die

Show me a rule and I’ll show you a baseball bat.

Copywriting is plagued with rules.

You know, you buy a book by someone who says they’re going to teach you how to write copy and it’s full of bloody rules.

So, let’s try a little experiment.

Starting with these ten.

1 The best headlines have benefits in them

So how did this ad manage to sell literally millions of Beetles to Americans in love with massive gas-guzzlers?

How about trying a controversial, shocking or just plain weird headline instead.

And since subject lines are a form of headline, this one should have tanked. Instead, it did rather well. 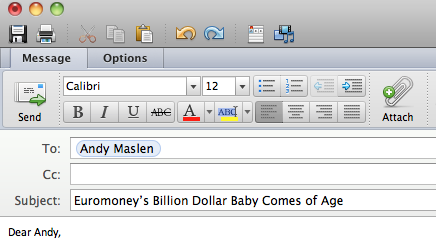 A conference that was in its 21st year.

A conversation that revealed that one billion dollars’ worth of deals had been struck there.

“What a wake-up call. Our tried (or should that read ‘tired’) and tested headlines were blown away by your ‘Billion Dollar Baby’ subject line. Our open and click-through rates went through the roof, and delegate registrations spiked dramatically within hours of broadcast. Great job – here’s to the next campaign.”

The best headline for your next campaign is the one that gains the most sales, conversions, enquiries or sign-ups. That’s all. The end.

Who knows, you might invent a new formula. Heaven knows, the world’s ready for one.

2 Talk about the reader, not yourself

But what if you wrote a story in the first-person singular?

Last week I did something unusual. I didn’t expect it to work. It had no right to work. But when I checked my bank balance this morning, guess what? It had worked.

I made a 673% return on an investment my bank manager said was stupid. My accountant laughed at. And my wife threatened to divorce me over.

Now I’m going to show you exactly what I did and why I’m now browsing the Mercedes website.

I think your reader would still be reading.

His Readability Score has had generations of copywriters tying themselves in knots trying to hit the magic 60%.

In fact, as an experiment-within-an-experiment, let’s write an email that is one single sentence, from Dear Mr. Sample, to Kind regards.

Maybe the curiosity factor and the sheer unbrokenness of the thought will keep our reader hooked.

4 Make your copy easy to scan

What if we didn’t include any?

What if our writing was so compelling that our reader had no choice but to read it from start to finish?

Have you ever seen headings in a novel?

When was the last time you saw a list of bullet points in a film review?

Do your personal emails have ‘navigation’ in them?

Scanability is necessary if your writing is so obviously commercial that your reader needs to get the message as fast as possible, reading as little as possible.

Try emulating the style of a friend’s email and maybe your reader will simply want to keep reading.

5 Don’t use italics – they slow people down

Italicised text is harder to read than roman.

So setting your entire text in italics is going to make it very hard to read.

But there is experimental evidence from behavioural psychologists that although subjects reported that they found italicised text hard to read, when tested on comprehension, they scored higher than those who’d been presented with an identical text without italics.

‘OH, NO,’ THE ‘NETIQUETTE’ GURU TELLS YOU, YOU MUST NEVER USE ALL CAPS. IT’S LIKE SHOUTING.

AND, THE COGNITIVE SCIENTIST WEIGHS IN, WORDS SET IN ALL CAPS ARE HARDER TO READ THAN THOSE SET IN LOWER CASE.

BUT AS WITH ITALICS, SOMETIMES, SLOWING PEOPLE DOWN COULD BE A GOOD THING.

ALSO, SHOUTING ISN’T AGAINST THE LAW.

SUPPOSING YOU DID AN A/B TEST AND THE SHOUTY ONE WON? THEN WHAT?

7 Get straight to the point

What’s in it for me?

Here’s aletter that, to date, has brought The Wall Street Journal over $2 billion in subscriptions revenue. 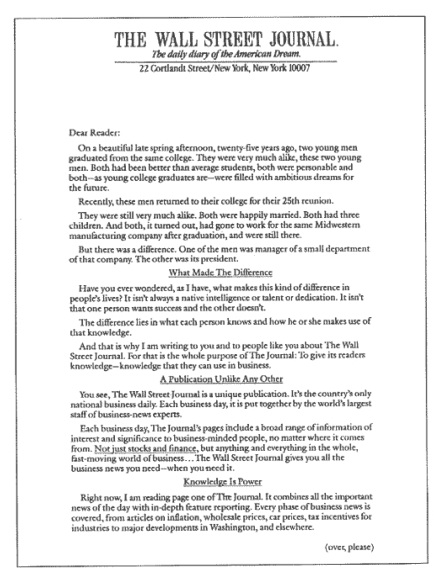 Look at the first sentence.

Yeah, I see. The point. If I subscribe to the WSJ I’ll be rich.

Try starting your next email, landing page or brochure with a story.

Your reader will be powerless to resist.

8 Make sure your grammar is impeccable

A chatty email from an everyday working stiff?

Start it ‘Last night, me and the wife made an interesting discovery’.

A brochure from a firm of solicitors that reads …

‘You can leave your property to whomever you choose.’

Grammatically correct; commercially crapismus maximus. (That’s Latin, that is. Something else you’re not supposed to do.)

9 Use a friendly tone of voice

Well, it depends what you’re trying to do, doesn’t it?

If you’re chasing payment or writing a disciplinary letter, I’d suggest friendly may be off the mark. 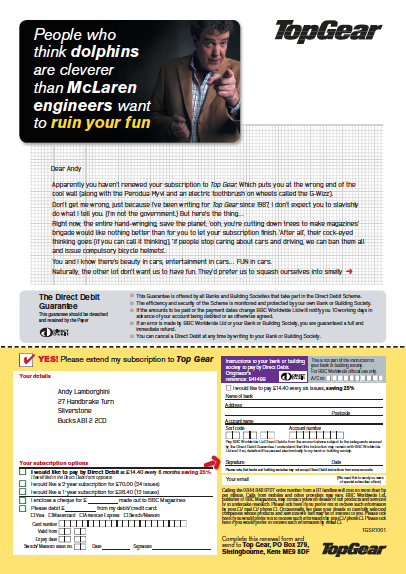 In a renewal letter from presenter Jeremy Clarkson for BBC Top Gear Magazine, I wrote this:

What are you playing at? You know there’s only one issue to go before your subscription finishes. And Michael, the Editor, has written to you THREE TIMES!

Either you’re about to join the greeny-weeny, ‘let’s get married to a dolphin’ nitwits and let your Top Gear subscription expire like some thrashed-to-death Impreza. Or you’re going to do what tens of thousands of other driving enthusiasts have already done and renew it.

Like I always say (OK, I have never said before today), nobody never got rich by not insulting their customers.

But <whispers>, what if the reverse were true?

Maybe, for your product, shorter copy is better.

You could save hours of time and probably thousands in external copywriters’ fees.

Look at this ad for Patek Philippe watches. 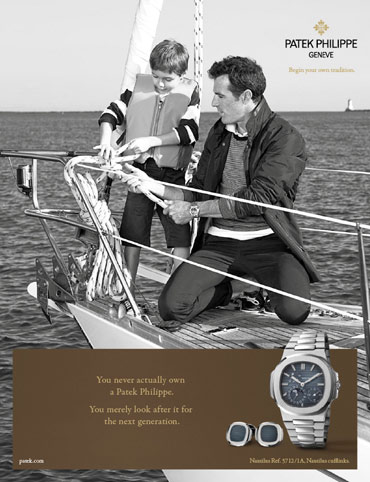 PP seems to be doing all right with this long-running campaign of virtually no copy.

Maybe you could be too.

Of course, getting the right combination of 16 words out of the trillions available could be a struggle… but worth a test, at least.

And I’m telling you this because

Would you like the following written on your tombstone?

Get more articles just like this one, FREE, direct to your inbox. Sign up for our monthly copywriting newsletter now.

Who Are You Writing For? (Really?)

Be nice to your clients – they pay for everything

This site uses Akismet to reduce spam. Learn how your comment data is processed.

Learn to be a copywriter
Watch the first three videos of Breakthrough Copywriting free of charge.

Try the exercises, too.
FREE videos
FREE exercises
FREE for 30 days.
SIGN UP

Hit enter to search or ESC to close